Jackson’s Kite brushes are made with environmentally friendly synthetic kolinsky hair, which is derived from sustainable materials. Here, I tried them for the first time, comparing them with natural sable and Jackson’s Studio Synthetic brushes, to see how they faired in terms of liquid holding, mark-making, and resilience. 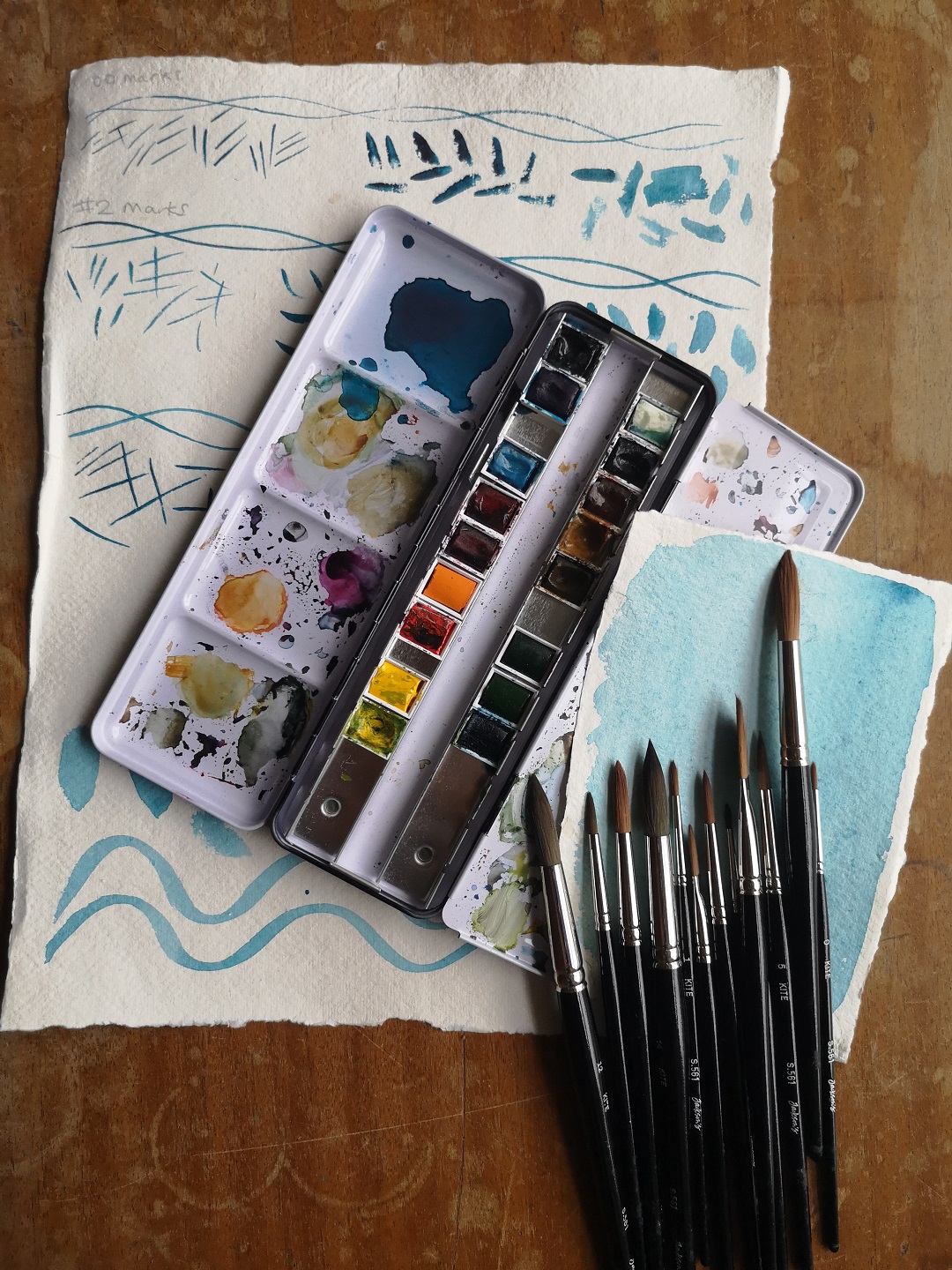 The Jackson’s Kite brush range is a beautiful, professional grade set of brushes that will facilitate a subtle touch with your watercolours. They are hugely versatile, capable of good liquid holding and control, with the resilience that is to be expected of a high quality synthetic watercolour brush. Read on for a break down of the tests I carried out and how Kite brushes faired alongside other watercolour brushes. 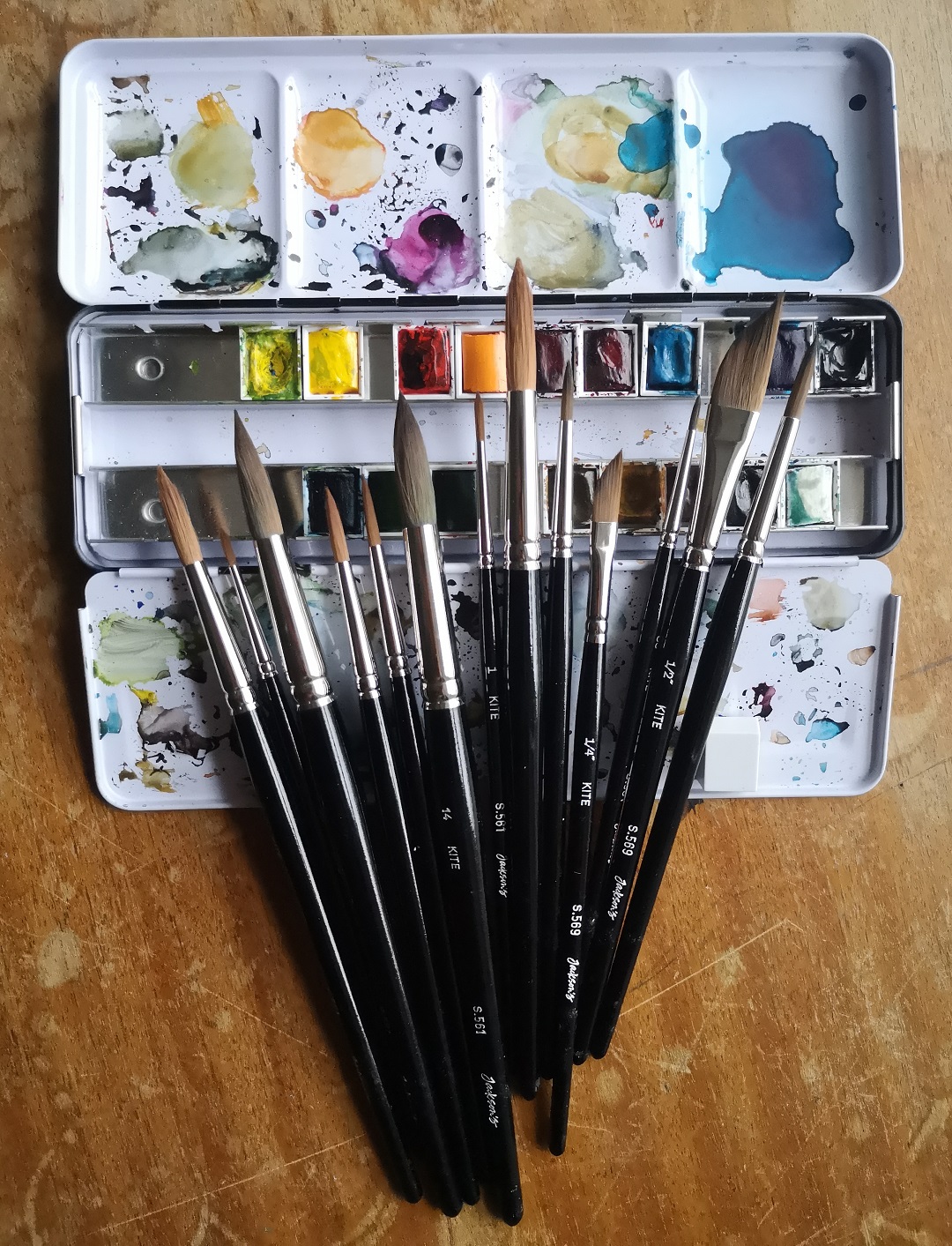 The brushes have beautiful golden brown hair, encased in a silver ferrule, with a black lacquer handle. The handles are quite short (a little shorter than Jackson’s Studio Synthetic brush handles) and are are great shape. The broadness of the handle as it nears the ferrule offers a well balanced feel. Because the hairs are relatively fine, the brush heads are more shaped than the Studio Synthetic brushes that I compared them with, which allows for a greater degree of liquid holding capacity.

One big advantage of working with sable hair is its ability to hold a lot of liquid, useful for broad washes of colour. The reason why sable hair holds a lot of liquid is down to the soft, fine hairs. You can easily see this when you immerse a sable brush into a glass of water. It may take a few seconds of moving the brush in the water, but soon enough the hairs of a round brush will fan out; the hairs are so soft and fine that they are lifted by the water. This also means that water can easily be held between each hair as the brush is lifted from the water – hence the impressive water holding ability. 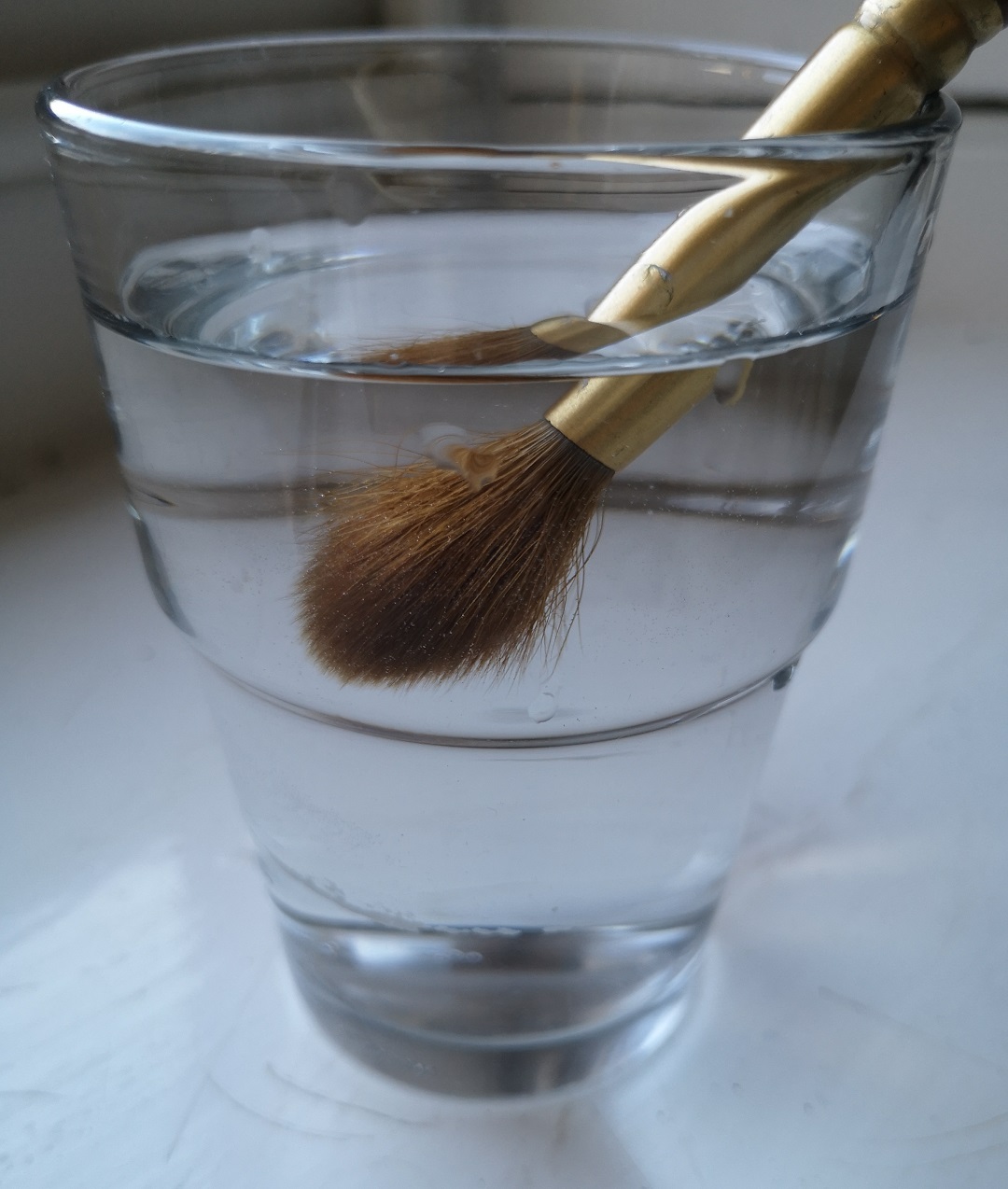 I then tested a Jackson’s Kite of a similar size in the same way. As you will see in the image, the hairs do not fan out in the same way. The hair is less fine and more rigid, and so they largely stay straight, and keep the same shape that they would out of water. However if you take a really close look, some of the outer hairs fanned a little. 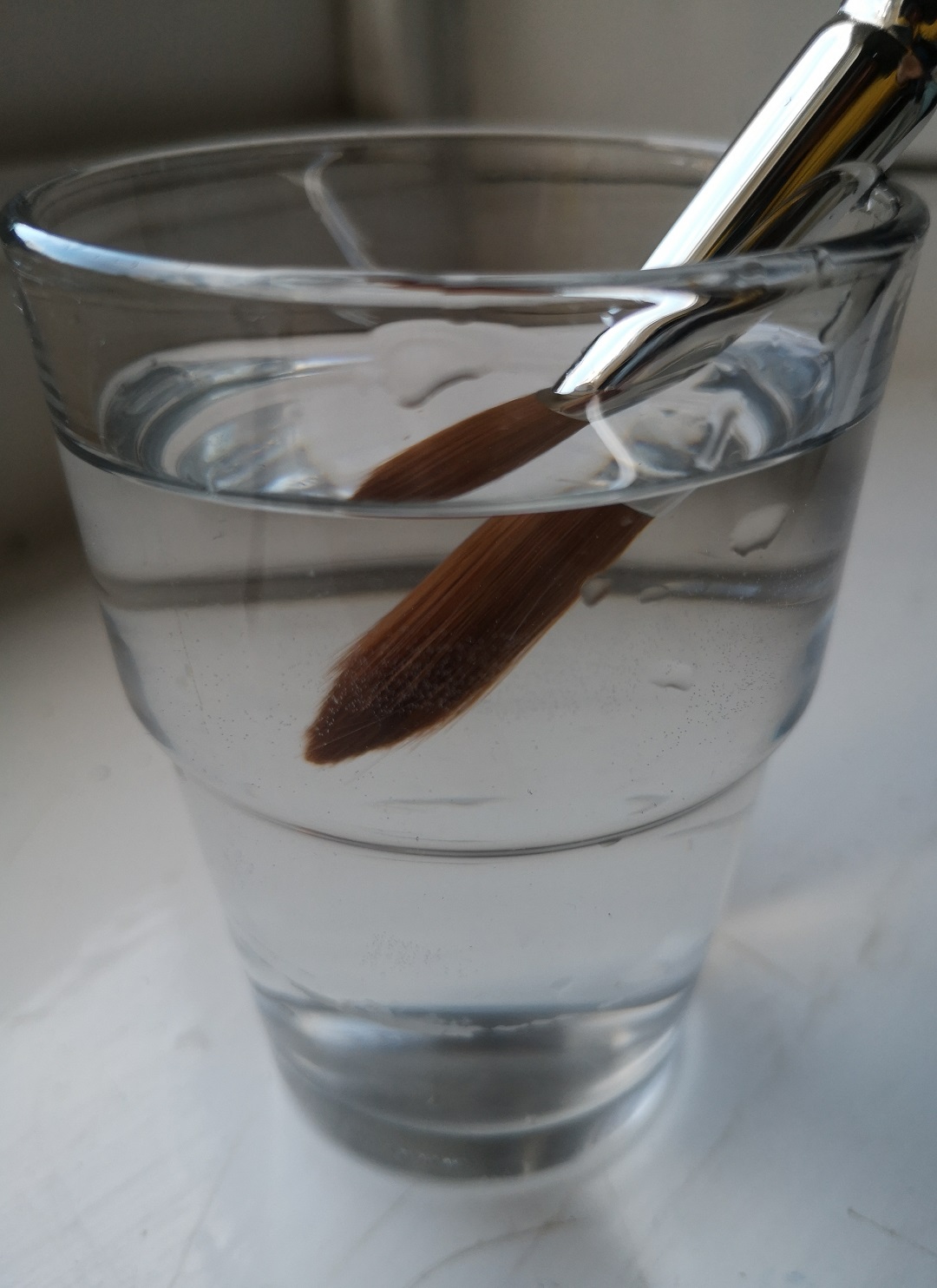 Finally, I tried this test on a Jackson’s Studio Synthetic brush – my preferred, regular watercolour brush. The hairs were slightly more rigid than the Kite hairs, demonstrating that this brush is likely to hold less water than both the Kite and the sable brush. Because I have had this brush for some time, the hairs have curled out a little – this tends to happen over time with use. The shape of the brush head remained unchanged when immersed in the water. 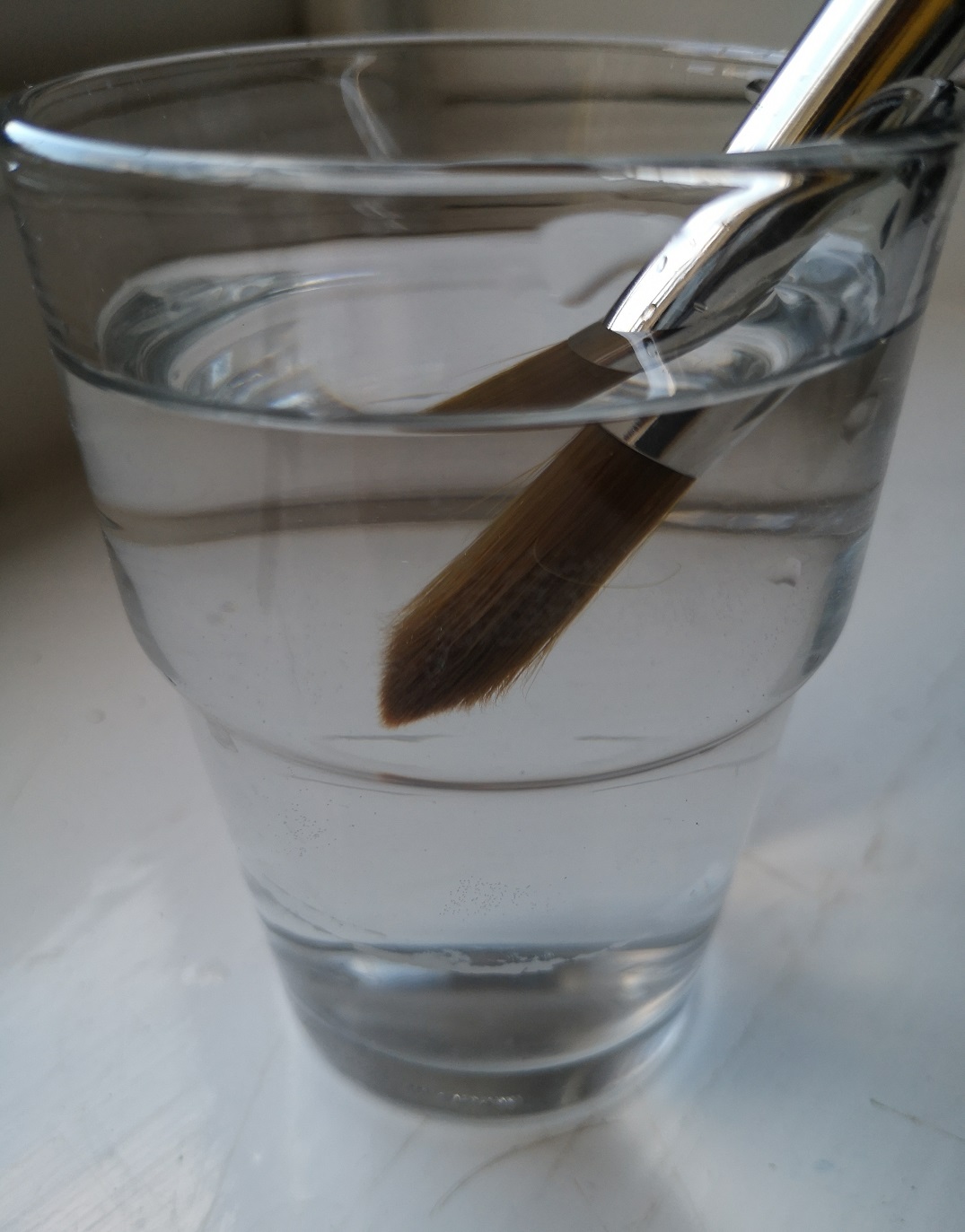 I then tested the brushes for the amount of spring in the hairs. I did this by holding each brush in one hand and bending the brush hairs back and releasing, to see how they felt, and how quickly they returned to their natural shape. As expected, the sable hair felt softest, and gently bounced back into place. The Studio Synthetic, which its thicker hair, gave a more rigid response, snapping back into place much more quickly. The Kite brush certainly felt mid-way between the two – I would say not really more similar to either the natural sable nor the Studio Synthetic. The hairs felt soft (although not as soft as natural sable) and sprang back with less rigidity than the Studio Synthetic. That said, a Studio Synthetic brush is not a stiff brush by any means, but it is certainly the most stiff out of the brushes compared here. 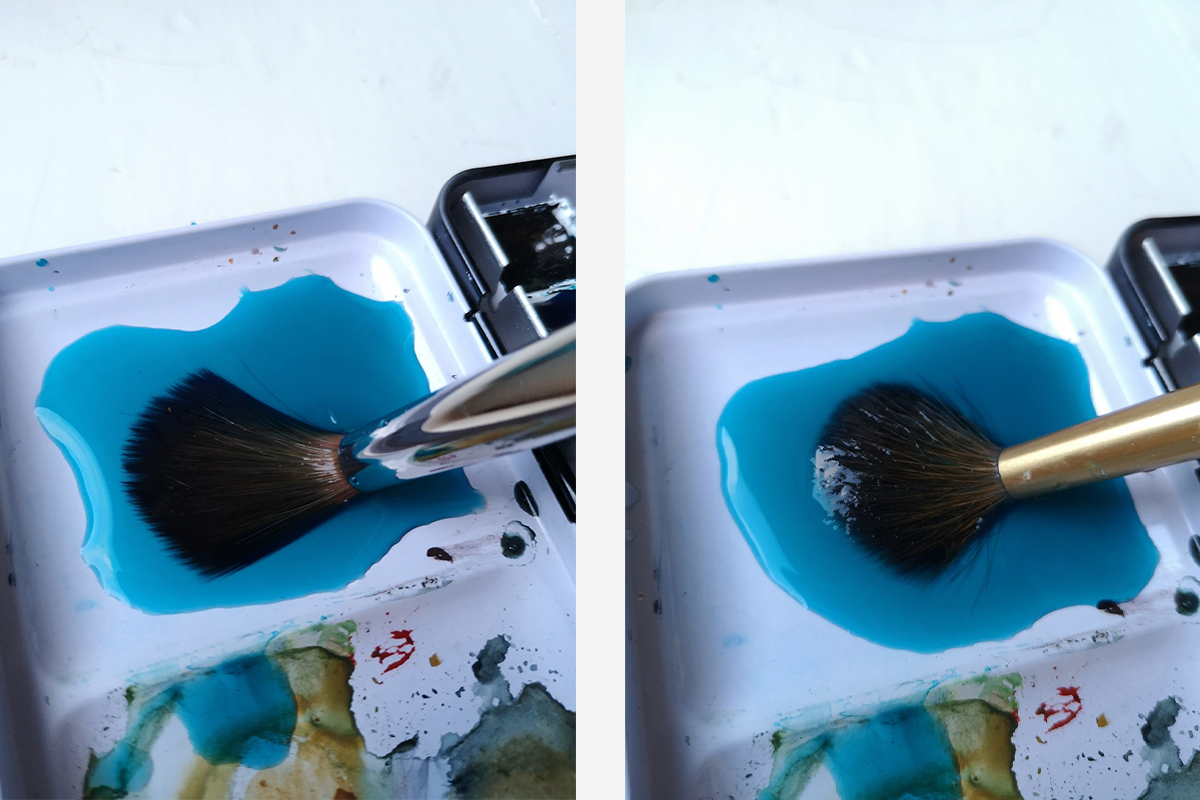 I applied a flat wash two two pieces of Jackson’s Eco paper – one with a sable brush and one with a Jackson’s Kite. As you can see there is no real difference, aside from the fact that perhaps the wash applied with the Jackson’s Kite may appear slightly more even (pictured left). 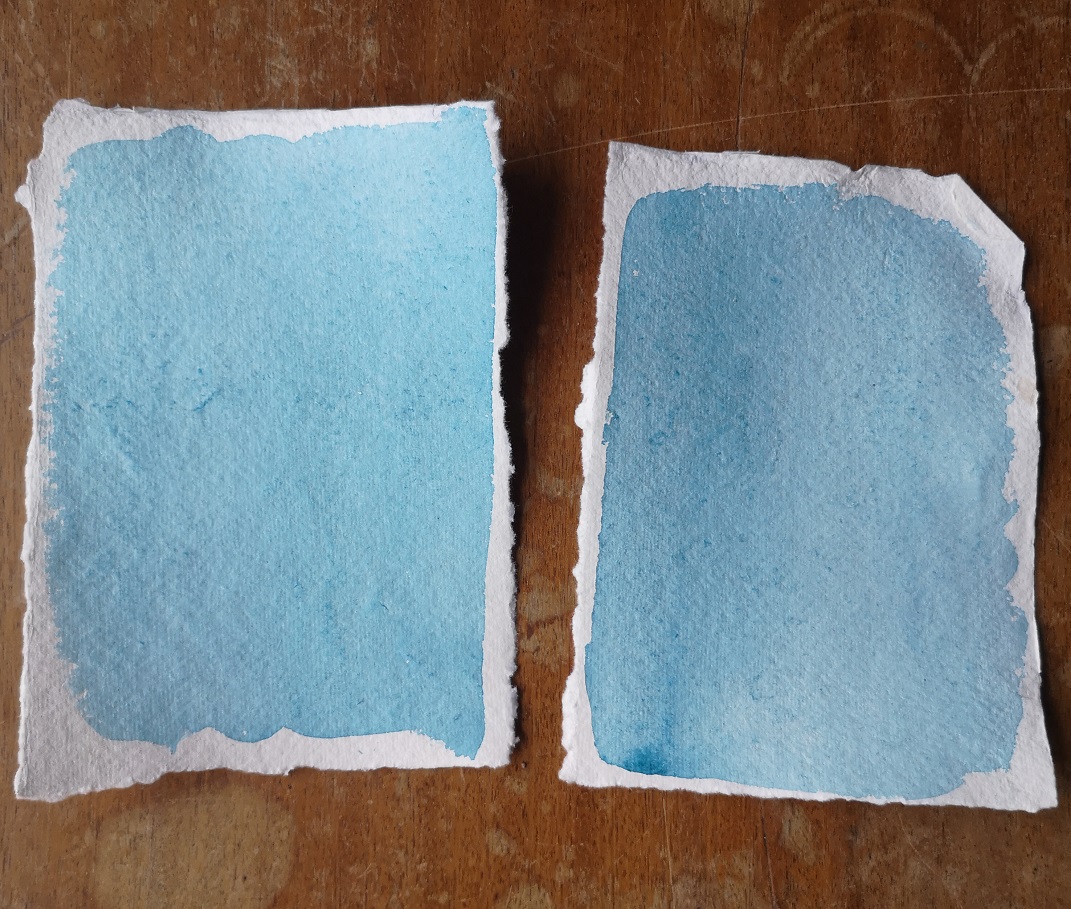 When saturating each of the brushes in a very dilute Phthalo Blue wash and applying a wavy line to hot pressed Arches paper, it was clear by how much excess paint was deposited at the end of the line applied with the sable brush how much paint the brush held. The Kite and Sable Synthetic brushes appeared to hold a similar amount of paint. 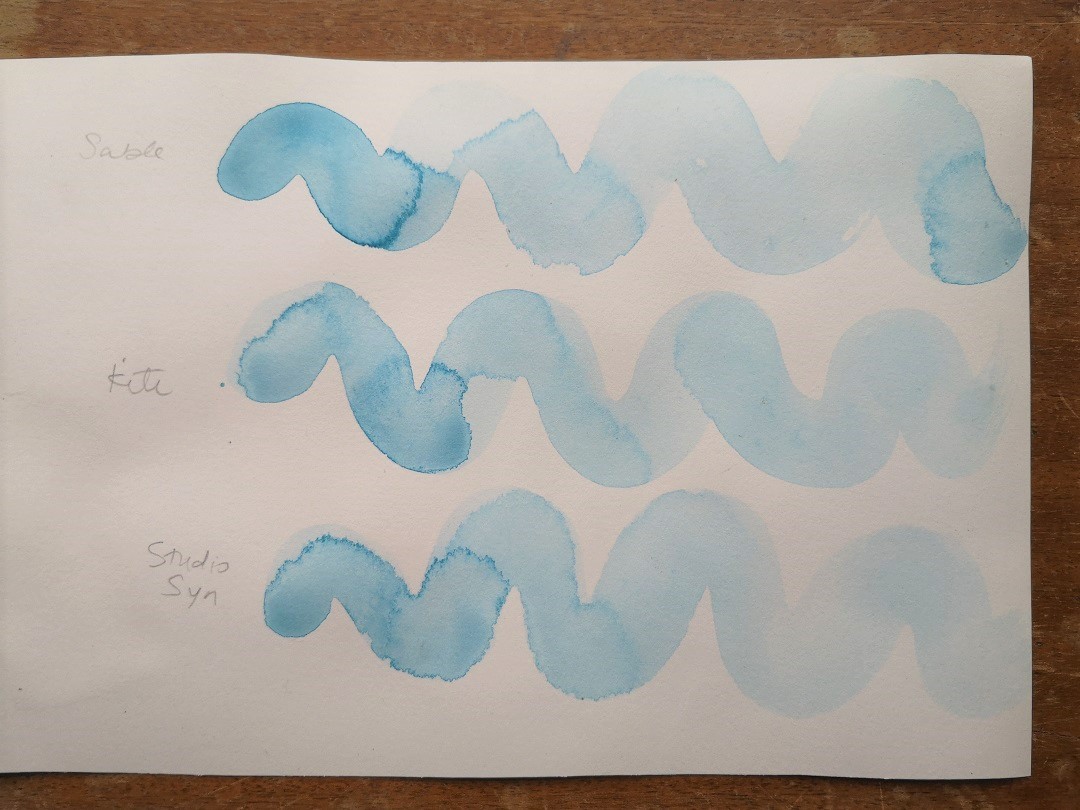 Three brushes saturated in dilute paint: Sable (top) leaves a deposit of excess paint at the end of its line, while the Kite (middle) and Studio Synthetic (bottom) brushes perform almost identically.

Then I used small brushes of the same size in each type to paint a finer wavy line. The Kite comfortably applied two rows of paint, while the Studio Synthetic brush pretty much ran out of paint after one line. The sable brush on the other hand comfortably held three rows of paint, and a little bit more. 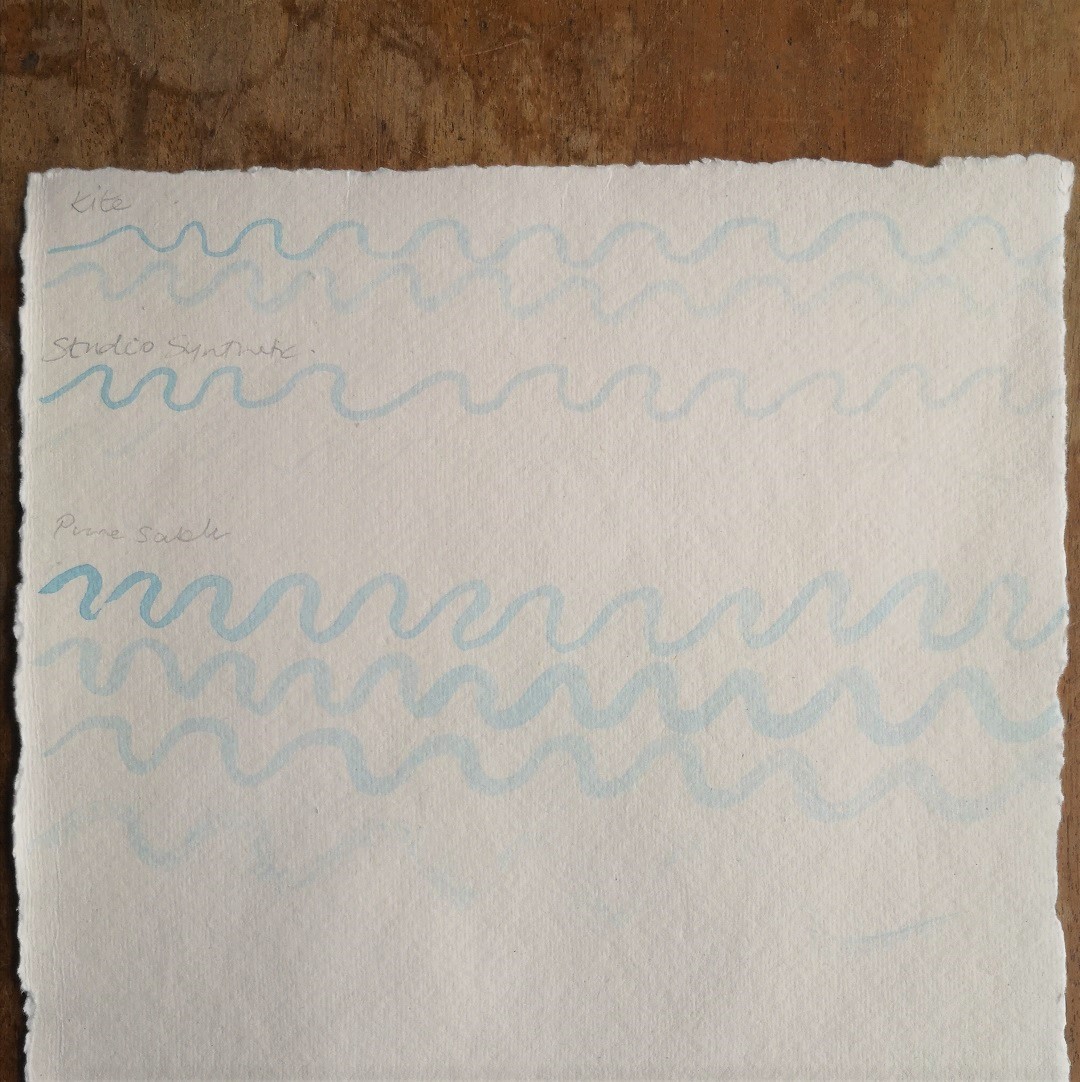 I then put the sable and Studio Synthetic brushes to one side, as I wanted to explore the marks possible with some of the Kite brushes. The smallest brush is capable of really long fine lines without breaking – and this is on a relatively rough, Jackson’s Eco paper, and so its water holding here is particularly impressive for such a small brush. By varying pressure you are able to vary the width of the marks made – testament to how compact the hairs are in each brush. 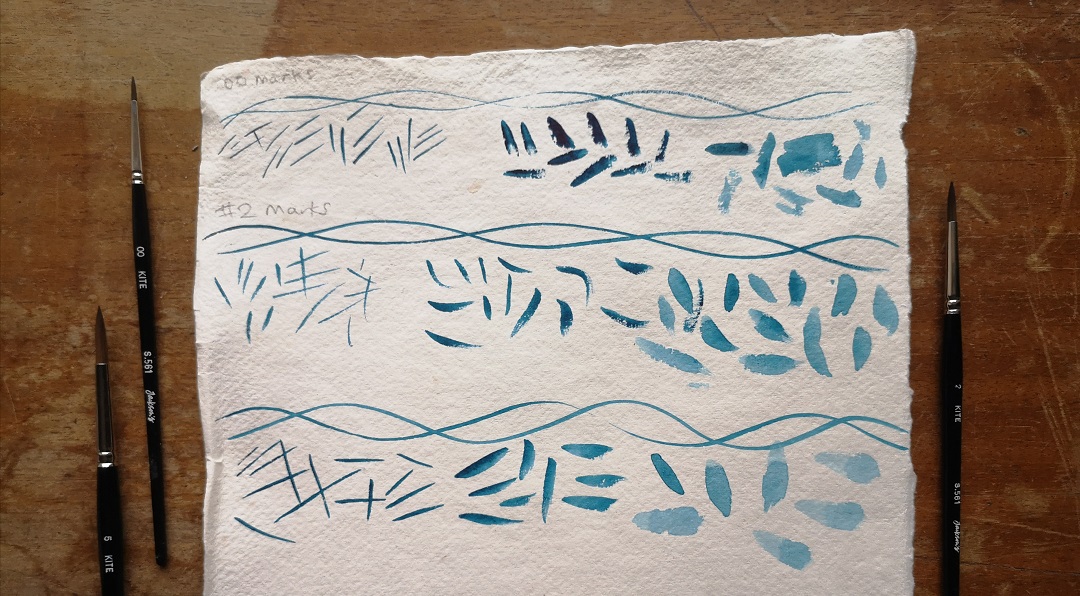 The dagger brushes are also very versatile, here are an array of marks possible with these triangular shaped brush heads: 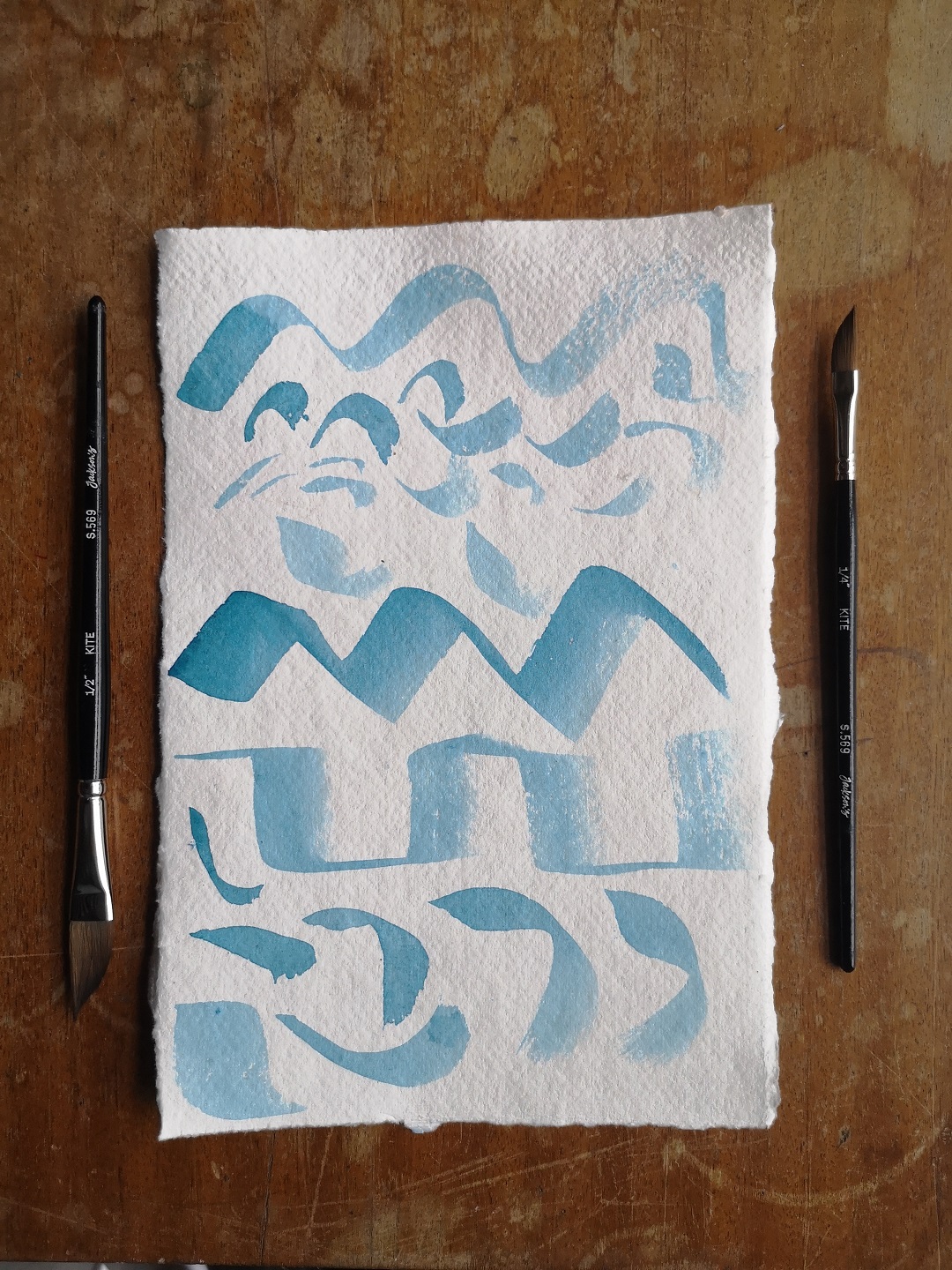 All in all, Jackson’s Kite brushes offer a resilient range that have a finer, softer hair which performs well in terms of keeping shape, achieving fine lines, and holding generous amounts of liquid for broad washes. If you’re looking for an alternative to natural sable the Kite range is a great investment that, with the right care, will be long lasting and a real pleasure to work with.

Lisa has been a contributor to the Jackson’s Art Blog for the past 7 years, writing artist interviews, and features on oil, watercolour and print. Alongside this she has worked as a painter and printmaker, exhibiting her work regularly at the Mall Galleries and the Royal Academy Summer Exhibition. In 2018 she reached the semi-final of Sky Arts Landscape Artist of the Year.